ORALMAN: WE ARE READY TO SERVE BEYOND THE EXPECTATIONS OF OUR CUSTOMERS
In her speech, Creditwest Bank Alsancak Branch Manager Ms. Deniz Oralman, thanked everyone, especially to the Board of Directors, who contributed to the opening of this new branch. Oralman stated that they, they are working to provide services beyond the expectations of their customers and that they will continue to work energetically.

ZAHEER: WE WORK HARD TO PLEASE OUR EXPAT CLIENTS AND MAKE THEM FEEL LIKE HOME
Creditwest Bank General Manager Mr.Mazher Zaheer said that they are very happy and proud that it was the 25th anniversary of Creditwest Bank and although this is a short period of time for the banking sector, Creditwest Bank has become the largest private capital bank in North Cyprus in this period. Our clients and employees are of course the basis of this position of the Bank, said Mr. Mazher Zaheer, who again thanked to the board of directors for their support. Zaheer also announced that the bank currently has an asset size of 3,400 million TL and its equity has reached up to 250 million TL, and that customer satisfaction is always the key to achieve these figures.

Mr. Mazhar Zaherer stated that Creditwest Bank is the leader of Northern Cyprus in Expat Banking, and provides high quality services to its expat clients with its qualified team and its concept branch. Zaheer added that, with their native English and Russian speaking customer representatives they provide high quality banking services via Çatalköy, Girne, Alsancak and Famagusta branches. Mazher Zaheer underlined that they provide private banking services to please their clients and make them feel like home, and they are in the leader position in Northern Cyprus in Expat banking.

NUSRET ALTINBAŞ: OUR AIM IS TO PROVIDE WORLD CLASS SERVICES
Chairman of the Board of Directors Mr.Nusret Altınbaş, said that as the Creditwest Bank and Altınbaş family, they believe in 3 main principles in business life. The first one is to be honest, fair, impartial and non-discriminatory; the second is being visionary, to improve the ability to think forward by considering the conditions and needs of the market; and the third one is to be a pioneer in service provision by working hard under every condition. Since the day of establishment, we have worked in line with these principles with the aim to provide world-class banking services, he added.

In addition, Mr.Nusret Altınbaş stated that they keep the employee satisfaction at the highest level and emphasized that he always appreciate women employees, who are close to 72% of the total employees, and who play a significant role in our success with their detailed, goal-oriented and meticulous work in business life.

SOFU ALTINBAŞ: WE WORK HARD TO BE THE PIONEER IN ALL AREAS OF ACTIVITY
The Chairman of the Board of Directors of Altınbaş Holding Mr. Sofu Altınbaş, stated that they serve in many sectors as Altınbaş Holding, and their target is to be in the top 5 in every sector they are active in. He also stated that, Creditwest Bank was founded 25 years ago with the name of Altınbaş Bank and with the aim to be in the top 3 banks within the sector, and today they are number one among the private sector banks. He also added that the Holding has a pioneering role in jewellery sector in Northern Cyprus, has become a gold brand that has 1200 employees and exports to Europe, moreover, they are one of the two companies active in fuel oil sector in Northern Cyprus. Mr. Sofu Altınbaş said they always get the first place in every sector with devotion, and they value the efforts of their employees. Mr. Sofu Altınbaş ended his speech by thanking all the stakeholders who contributed this development.

VAKKAS ALTINBAŞ: BRITISH, RUSSIAN AND FOREIGN PEOPLE FROM 26 DIFFERENT COUNTRIES OF THE WORLD PREFER US FOR THEIR INVESTMENTS
Altınbaş Holding Board Member Mr.Vakkas Altınbaş stated that they aim to be the best example in the banking sector, and to provide fast services, have exemplary employees and use innovative technologies. These achievements are not only by Cyprus but also from abroad, he added. Mr.Altınbaş thanked all employees of Creditwest Bank and the customers who prefered Creditwest Bank for their investments. Mr. Vakkas Altınbaş, stated that they set a principle in the very beginning and only worked with reliable and presentable experts, and this is why they are preferred by the strongest companies of the island today. He also thanked to British, Russian and other foreign customers from 26 different countries of the world, who preferred Creditwest Bank for their investments.

AYŞEGÜL BAYBARS: I FEEL PROUD OF CREDITWEST FAMILY WHO INVESTS IN OUR COUNTRY, PROVIDES EMPLOYMENT AND CREDIT OPPORTUNUTIES
Minister of Internal Affairs Ms. Ayşegül Baybars stated that Creditwest Bank is one of the well-known institutions in the banking sector, and added that she is aware of the important investments made in Expat Banking by Creditwest Bank. Ms. Baybars, as a representative of the government, said that she feels proud of the work of Altınbaş family, who invest in the TRNC and support the development of the economy. She said that 2018 was a difficult year for the economy of Northern Cyprus and the banking sector and added that, considering all the economic recession, the big scale investments of Creditwest Bank in the region will play an important role in the recovery of the economy and increase the foreign investments in the country. Ms. Ayşegül Baybars congratulated Creditwest Bank, which provides trust and stability in the banking sector, for this significant investment they made in these economically difficult times. She added that the provision of modern services is very valuable for the business world and for the people of growing Alsancak region during this competitive period. Ms. Baybars also added that Creditwest Bank’s achievements in terms of employment, credit opportunities and services are very important. Lastly, Ayşegül Baybars, said that the Creditwest Bank family attaches great importance to gender equality, the vast majority of employees are women and this is one of the reasons behind its success. 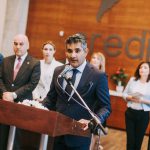 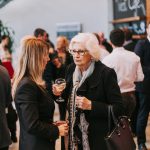 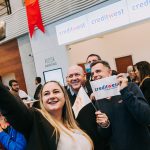 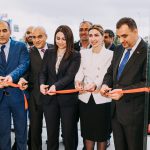 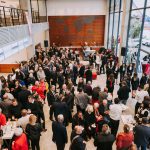 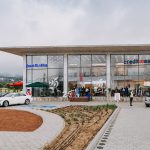